From music to the heart and back: The story of Laura Hassler

Laura Hassler is the founder of Musicians Without Borders, but she is, of course, much more than this. I had the privilege to talk to her via zoom for a very inspiring interview.

If, after reading the article, you feel as inspired and touched as I have (and I am sure you will), please consider making a donation to Musicians Without Borders, to support them in bringing their fabulous and important work ahead. You can do so through their website, here. 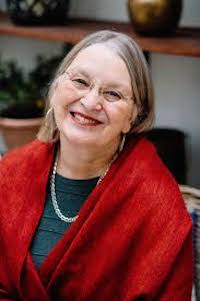 Laura was born and grew up in New York. Her parents were peace activists who created a cooperative-living community outside New York City, which fostered an interreligious and interracial atmosphere. Laura remembers growing up as a sort of an expat, among racially mixed families, artists, activists, musicians, and in constant contact with diversity. Music was a steady element in her life. All musicians of the community gave their time to teach music to the children. She also grew up listening to stories about civil right and anti-apartheid movements, and of how music kept people together in shared struggles for social change.

Activism for social justice and music were always woven together in her life. Since she remembers, Laura was constantly looking for ways to use music as a way to connect people.

After university she moved to Paris to work for Thich Nhat Hanh, after what she calls a peace ‘spy’ mission in Vietnam for his organization.

Back to the States she married and had children, but her centre of interest and her parents (who in the meantime had moved to Spain to create yet another community) remained in Europe. She was more interested in international work than working in the US, and did not want to raise children in the American culture, which she considers a culture of violence.

When a small chance came up to move to the Netherlands for work, she and her husband took it. The marriage ended three years after moving, and Laura went back to her musical career. From teaching guitar, she moved to setting up singing groups, and then to conducting choirs. She founded the Netherlands’ first International Women’s Choir, which she led for 20 years. When she ‘retired’, the group was made up of 28 women from 21 cultures. The choir still exists today, sharing music and going onstage.

Laura had always been very attracted by music of other cultures. In the 1990s, she had set up a World Music School in her host city to provide a space for music from non-Western cultures. Years before, when she had discovered music from the Balkans, she was thunderstruck by the crossovers. She loved how the music was shaped by Turkish, Arab, West and Eastern European influences that melted with different rhythms, harmonies, and vocal ornamentations right out of the East. As her Dutch music practice grew, she assembled a small group of women, who could sing the way the Balkan women sang, producing a very strong chest-driven sound, particular to the region.

When war in the Balkans broke out in the 90s, singing that music while the destruction of the whole area was carried out felt very strange. There was, however, one occasion on which it felt absolutely right. Laura had become a well-known choir director in her city and was often invited to produce concerts. In 1999, at the height of the Kosovo war, she was asked to organize a World War II memorial concert on May 4th. She decided to do a concert of Balkan music, which would play folk songs of people who had been opposed to each other throughout history, and dedicated to those suffering from the current wars. Against a background of daily newscasts of massacres, concentration camps and bombed-out villages, a concert of ordinary people’s songs, about what all people sing about, was very moving for everybody. At the end, there was a long silence, followed by a 20-minute ovation. 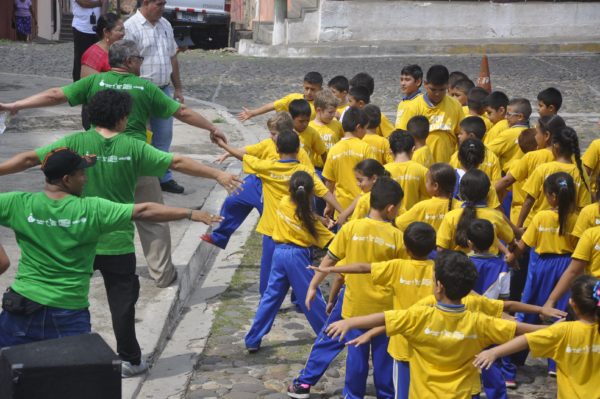 Laura identifies that moment as the one when Musicians Without Borders was born. One of the musicians suggested to Laura that she “take this concert to Kosovo to stop the war”. The idea was, of course, not realistic, but it gave her an idea, and she started contacting people, reaching out to peace organizations and musicians and making plans. While Laura and her friends and colleagues didn’t get to the Balkans that summer, they did take their music to camps for Kosovo refugees throughout the Netherlands.

It was a fantastic experience and everyone – musician friends and refugees alike – came up with wonderful ideas. Someone did workshops, a percussionist did drumming with the children, other musicians gave violins, accordions and guitars away to musicians who had lost their instruments, thus planting the seed of the Instrument Fund that has been going on for 20 years, providing instruments to musicians who have lost them as a result of war.

Six months later they were in Bosnia for the opening of a day-care for children after school. The project, now called Musicians Without Borders, grew organically in that way. During the first two years there were lots of musical exchanges, tours and concerts, until they realized that those were beautiful experiences for those involved, but not changing much. It was then that a music teacher who had volunteered in Srebrenica said she wanted to start a long-term program: That was the beginning of Musicians Without Borders’s long-term work and its move toward capacity building, training and collaboration with local musicians and organisations.

In Laura’s words: “We had a vision of musicians as peace activists. We wanted to use the quality of music that touches people in different ways than language does. We wanted to engage with that quality to make a different kind of contribution to peace building than other organizations can do”. 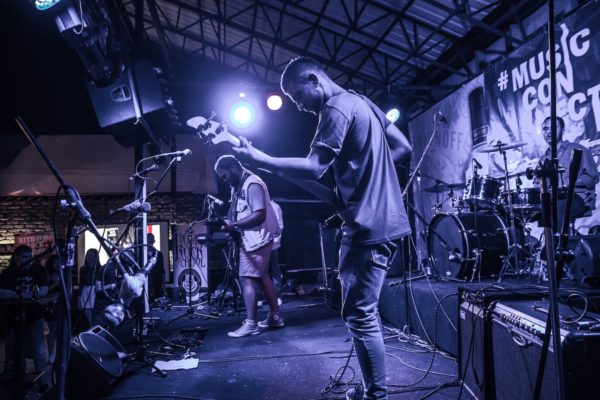 Music can help deal with trauma, dislocation, loss, and lack of trust. Wars and conflicts lead to the reduction of people’s identity. People are reduced to a single story, the one that identifies them as “enemies”. All the other parts of their identity do not count anymore, but being involved in music can reveal other parts of their identity and make them count again.

By now, 20 years later, Musicians Without Borders have carried out many different projects. They have set up a rock music school in Mitrovica (Kosovo), restoring a shared musical history to both sides of the now ethnically divided city. In the Mitrovica Rock School youth from both sides of the river come together in ethnically mixed bands, composing, arranging and then performing songs together. In the Rock School, it’s never about ethnicity, it’s only about music. 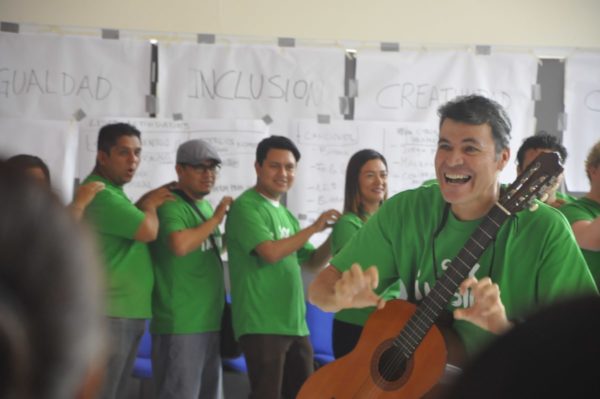 In El Salvador, a country living in the legacy of war, and shaken by a culture of gang violence, they are training 100 music teachers and facilitators from cultural centres, using MWB’s community music training, based on five principles: safety, inclusion, equality, creativity and quality. This is a great way to give people who work with children tools to use music in order to increase a child’s sense of self-worth, their connections, empathy and sensitivity to others. They create attention and excitement with an approach to music that doesn’t require instruments, since instruments cost money. Body percussion has proven very effective. It’s a simple way to produce music and create bonds, without needing to be able to play an instrument. Children who use body percussion have fun and create something together. Being in the same rhythms connects, calms and regulates. Neuroscientists are showing these days that moving to the same beat increases empathy.

Another beautiful approach of Musicians Without Borders is illustrated in their work with unaccompanied minors in Crotone, Italy. SOS Children’s Villages invited them to try out some of their approaches with these groups. MWB brought two rappers who worked in one of 18 centres for unaccompanied minors, with a group of 11 young people. They created a rap song together; each of the participants wrote a verse. This is a very accessible way for young people to make music, it speaks to them and does not require musical training. They create the song, rap it together, and can keep it on their phones, where they can listen to it. This work was replicated several times in Greece with great results. Kids arrive with no self-esteem, no confidence at all, and then they write their song, they make it, they do something for themselves. Even within the limits of a short-term activity, using rap and hiphop can be a great way to work with young people affected by the refugee crisis. 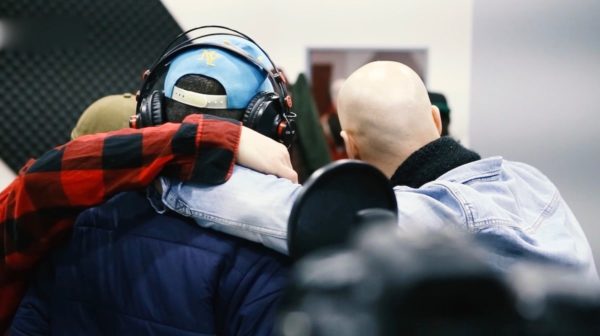 At the word empathy, I ask Laura to elaborate. “There is a physical experience of empathy through music”, she says. “Every musician knows that something happens when you make music together with somebody else, it’s a connection, and I believe that that connection is based on the fact that all human beings have the capacity for music in their bodies. What happens when you are making music is that your body and mind recognize this commonly shared thing, or that we are common, that we do share. That’s something that music does. There is something that music does that allows us to feel the connection with other human beings”.

Thank you SO MUCH Laura for being such a wonderful human being and for bringing music to our world!

Pages:
Tags: laura hassler music for empathy musicians without borders
« Aufwind, a beautiful project in the Peruvian Andes
We are all Expats from a world that we simply don’t know about »