How living abroad has taught me a few things about work

What Expats Can Do invites all expats to draw lessons from their experience abroad, and be a voice to help enrich the lives of individuals that do not have the opportunity to travel, and cannot witness firsthand what happens in the less fortunate areas of the world.

As some of you know I lived in Jakarta, Indonesia, until a couple of weeks ago. Like most expats that have advantageous conditions in their working contract, I had a maid. She was a fantastic woman who took care of me and my house with devotion and professionalism. Thanks to her I was able to devote a lot of my time to my work and all the projects I love.

Shortly before leaving Indonesia for good, she shyly approached me one morning. She was holding a threadbare plastic folder that contained a few recommendation letters, printed on worn-out sheets. She proudly showed them to me and asked me if I could add mine to her dossier. My heart shrank and I could not avoid comparing my situation with hers. 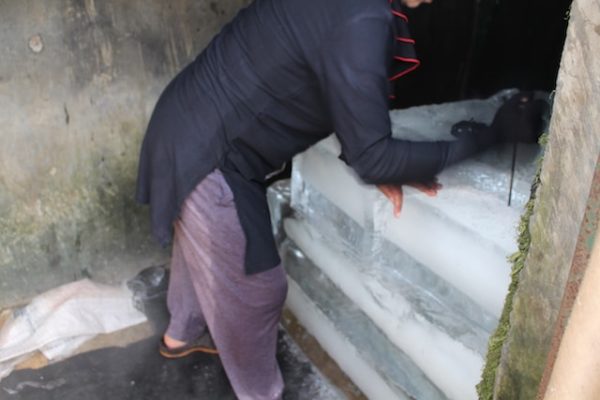 Ani has no LinkedIn profile, no electronic CV, no website, and no blog. All of her working history is contained in those few worn-out papers – and when an employer leaves, she can only hope they will find her another job or be motivated enough to recommend her on expat websites and mailing lists. Her whole working future depends on the willingness of her employer to put energy in this search.

The tools at her disposal, her independence, and ability to promote herself are not the only differences between her, and I though. While I can afford not to work and still live in perfect dignity, if she does not work, she does not eat. Like many other women in the world, she is the breadwinner. Her husband lost his job months ago and has not found another.

I am grateful for my expat life because it has put me in contact with the other half of the world, that part of the planet’s population that cannot afford not to work. And in order to work, they are often forced to adapt to dreadful and underpaid jobs, which many in our privileged positions would abhor.

Some time ago I visited the flowers market in Jakarta. There I discovered that many of the floral decorations used in weddings require a lot of ice to be kept fresh. Within the market there stands a little room where a woman produces and sells ice for this very purpose. She spends her days breaking ice blocks, putting pieces of ice into a machine that grinds them, and collecting the ground ice in big bags to be sold. For hours she is in that freezing little room, bent over ice blocks and filling bags with ground ice. She has one bare hand and a drenched woolen glove covers the other one.

Another thing I often observed in Jakarta (but this is true for so many countries in the world) is that trash collection is as lucrative as ever. I took this picture close to my house in Jakarta: 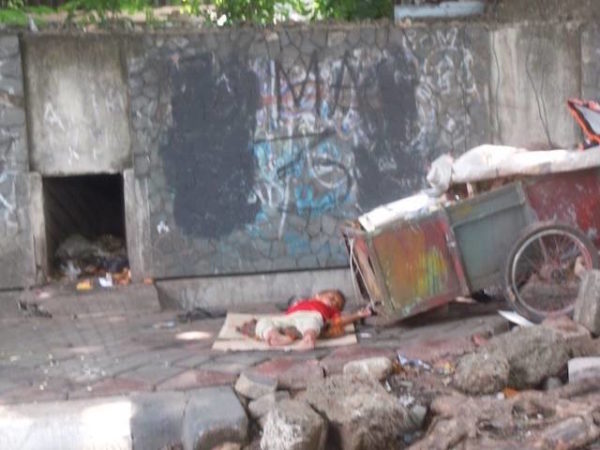 The mother of the child sleeping on the cardboard must rummage in the trash to find recyclables that she will sell to the “lord of trash”, as I explained here. She obviously has no one to leave her child with, so improvises a bed beside the trash on the street. I wish no mother on earth would ever be forced to do something like that.

Ani and her worn-out folder sent my mind spinning and I remembered another episode I witnessed in Lubango, Angola, in 1991. At that time we collected food donations to distribute in the war-plagued region, and stored them in a warehouse. When we were ready to distribute, we employed workers for the day to help us load the trucks and unload the food at various distribution points. The stock of food consisted of bags of wheat and cans of oil. I will never forget when a worker, who lifted the last cans onto a cement step where they were being arranged, used his hands to scrape a few drops of cooking oil and collect them into a plastic top that had fallen during the loading operation. I cannot describe what I felt and I do not even think it necessary.

What I want to point out is that when we do not get in touch with such situations, it becomes easy to forget they exist. But they do. This is my small contribution as a reminder to reach out to those who are not as fortunate as I am and don’t get to see all that I see.

Pages:
Tags: Empathy humanity poverty the other half of the planet
« How to Build a Culture of Empathy in International Schools – and in our Lives
Children’s Hope In Action: Improving lives, saving futures! »