Francesca sends us this recommendation for the book The Empathic Civilization, interesting food for thought from sociologist and economist Jeremy Rifkin. Human beings have many things in common, including a deep-rooted instinct for social relationships and the ability to form a new consciousness, both global and collective. Simply the act of reading an account of this kind means testing our preconceptions about human beings and trying to consider events and phenomena from another perspective: one that views our fundamental nature as human beings in a different way. Here’s what Francesca has to say. 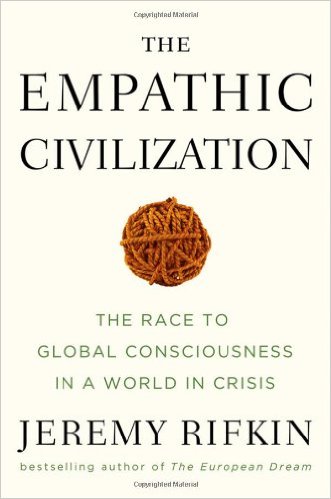 This book takes us on a fascinating journey through human evolution, a journey covering ground that our collective sentiment, for the most part, has not yet explored. The discovery of mirror neurons – so-called empathy neurons – during the 1990s offers a completely different interpretation and is leading scientists from a wide range of disciplines to rethink the theories that characterized the age of reason. Today the cognitive sciences seem to recognize that the most profound human instinct is not the anticipation of pleasure, nor even the struggle for survival or the selfish fulfillment of our own needs, but rather the creation of social ties.

Rifkin takes us back through the biological, economic, cultural and social history of humankind, which is being rewritten by the scientific community of the present day. Our modern, technologically advanced civilizations have led to an unprecedented mixing of peoples and expansion of consciousness, but not without consequences. The path of this new ‘homo empaticus’ is, in particular, characterized by the empathy/entropy paradox – the gradual deterioration of a system to the point where it is no longer possible to replenish the energy it uses. Our huge consumption of natural resources is leading to the depletion of these same resources.

Never before have we been as aware of what we are, never have we been as clear about our potential for developing a new consciousness, both individual and global, as we are today. Yet all this is made possible by our greater and greater consumption of the planet’s energy and natural resources.

Will what Rifkin describes as humanity’s ‘biosphere consciousness’, an awareness of ourselves as part of the earth’s system, be able to guide us towards the solution to this paradox? Will we manage to reach the level of global empathy needed to save ourselves and the earth that is our home in time? The human race is facing the most important challenge of its existence.

This book has affected me deeply. In practice, it’s science telling us we’re better than we had always thought. This can only fill me with faith and hope that things can improve for us and for this world of ours. It won’t be easy, but it’s certainly possible. And this can come about not by denying who we are, but instead by following and listening to what, it turns out, is our true nature. For some cultures this has always been clear; we Westerners are finally getting it!