Living abroad offers us opportunities to be in contact with unfamiliar cultures and to listen to life stories far removed from ours. I believe that “telling” is one of our duties when we encounter stories of people who have no voice, stories that could slip by us silently. One of the most important tools of empathy is listening to others without prejudice.

Listening and telling is what Lucio Cascavilla, musician, writer and documentarist, did, while making his documentary The Years We Have Been Nowhere, which will be released in September, and which tells the stories of many deportees from Western countries. At the same time, Lucio was writing the graphic novel (or I should say graphic journal) which will be published in Italy as “Tre storie per non morire” (“Three stories of how not to die”). The book, illustrated by Mattia Vesco, Assia Ieradi and Riccardo Mattia and published by Morsi Editore, is set in Sierra Leone, a country where the author lived for two years and where he shot the documentary.

“Without dignity there is no freedom, without justice there is no dignity”: these words were spoken by Patrice Lumumba, who was Prime minister for a few months in 1960, and led the independence movement in the Democratic Reublic of the Congo from then until Mobutu’s coup in 1961. This is one of the many quotes that can be found in the book and aptly represents the idea on which it is based.

The book talks about departures, returns, and the impossibility of leaving a country, Sierra Leone, a country about which we know very little, and which deeply marked Lucio. 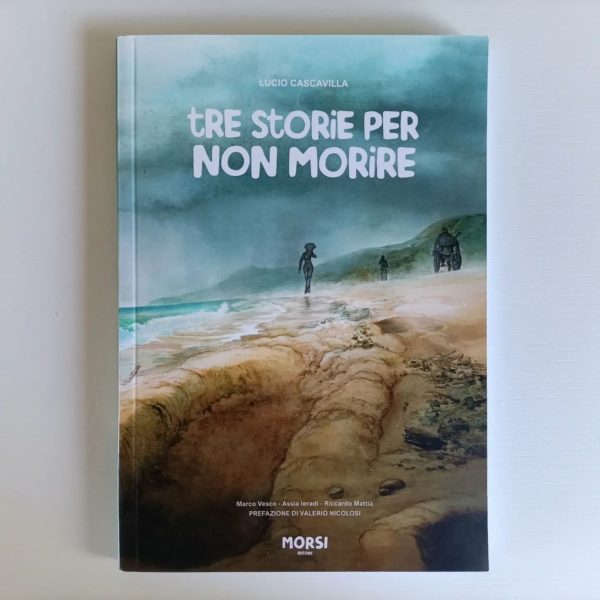 I would like to dwell on the distressing thought with which Valerio Nicolosi opens his preface, a thought that accompanies the reader all the way through, and that will hardly leave him even after the last page. It is the idea of going on an endless journey with only hope: facing weeks, months, maybe even years of fear, violence, and abuse, but resisting in the name of those hopes that weigh on you like the most precious luggage.

And then, in a flash, the police, perhaps even the police of that very country that embodied your dreams for the future, capture you and bring you back. In just a few hours you’re back to square one. Months of travel to get away, a few hours to come back. A return to a “home” that is no longer really home, because over there those who are forced to return are considered losers who did not make it. An anguish that takes your breath away.

There is the story of Abbas, brought back in chains to Freetown after a long journey to the United States; there is the story of Foday, who is only 27, and cannot leave because he is alone and sick, confined to a wheelchair, spending his days begging outside a hotel; and there is Regina, who returns after spending many years in Germany to escape from the massacres that have marked Sierra Leone, and is still facing endless difficulties.

Among the pages of “Three stories of how not to die” we also find the voice of our comfortable Western world. It accompanies all the stories in the background: it is the voice of the radio or television that distracts us with irrelevant issues, politicians’ promises, and popular songs.

There are many reflections that can arise from this book. Among them, the idea that “the destinies of people are connected, whether they live in China, Africa or Europe”: this is increasingly evident, but we tend to forget.

This is why we should be thankful to people who, while living abroad, make us aware of the realities they face.

Focusing on stories of individual people hidden behind the numbers that we read or hear in the news is essential.

Because if it is true that “What matters is not to know the world, but to change it”, as Frantz Fanon, a psychiatrist originally from Martinique and specialized in decolonization (quoted in the book), said, changing the world starts with changing each conscience, and awareness is the first and indispensable step towards this goal.