Claudia relates on her visit to Dia.Lo.Gue, and art gallery in Jakarta, and shares a reflection on how art can spread empathy.

I recently visited Dia.Lo.Gue, a beautiful art gallery in Jakarta. While admiring the art exhibition, What Expats Can Do was constantly on my mind, and I could find lots of links between the art works and the issues I have been particularly careful about since we launched it.

Dia.Lo.Gue is a modern art gallery that regularly invites artists to express themselves around a specific topic. The one the current exhibition is about is “The sea”, and it was interesting to observe how this call had set young artists in motion in a variety of ways. Whatever piece of work they had created around the sea, it always had an element of empathetic observation and sharing.

This one for instance: 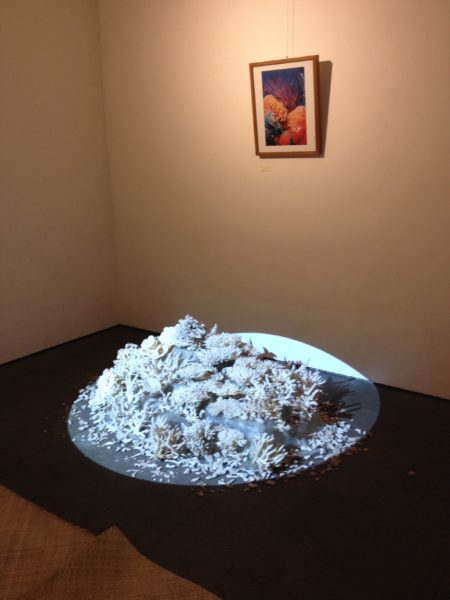 It stages the funeral of the coral, the same way funerals are carried out in Indonesia: The corpse is laid on a carpet, his picture on the wall, and mourners come to pay respect.

Right in front, another art work was a praise to the women of Muara Angke, a neighbourhood on the sea, in the northern part of Jakarta. Muara Angke is known for its intense activity that revolves around fishing and preparing fish to be sold at the warungs (little stalls that sell food). While locals call it a “fishing village”, expats define it a slum because of the appalling living conditions of its inhabitants. In particular, according to this artist, of their women: They spend their days working under terrible conditions, and have nowhere to put their children, so they take them along and keep them on the spot the whole day, while they clean, cut and press fish. The terrible smell of dead fish fills the air, while these women talk about the hardship of their lives, the husbands who have left them, the children who get sick. The artist chose to represent breasts as symbols of motherhood. In this context, breasts have been dried up and are filled with clam shells, to explain how the inhuman work has replaced mothers’ milk, and therefore, life. 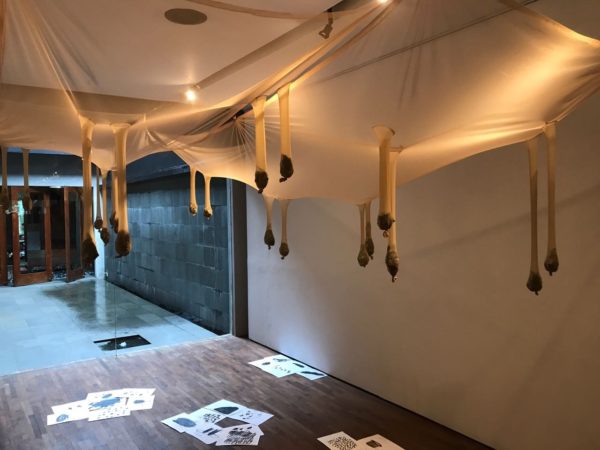 On the other side of this work of art was a more cheerful but not less important one. The artist had chosen to concentrate on a certain era at the beginning of last century, during which a group from Makassar (Sulawesi) traded sea cucumbers with the Yoingu tribe from Northern Australia. Apparently it was a time of frequent and warm contacts, and what the artist chose to recreate is a symbolic composition that the Australian group put together to welcome the Indonesian traders: A closed circle made of stones symbolized unity, friendship and embrace. 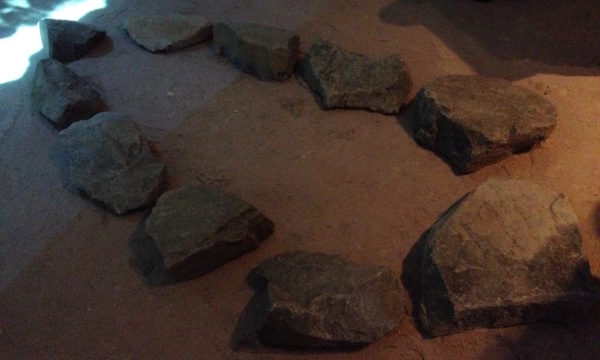 The last artwork also talked about the hardship of Muara Angke. It consisted of a carpet of clam shells, a wooden hut and a video. The idea came to the artist when she visited the portion of the Muara Angke where mussels are processed to be sold. They are boiled in huge pots, then spread on the ground, opened with bare hands and set aside to dry before being sent to the shops. Smoke from the burning wood to boil the mussels, vapors, high temperatures and clam shells fill the environment. The workers and their children sit on dirty and cutting clam shells, and to show this, the artist made a carpet on which visitors can walk, hearing the cracking sound of the broken clam shells and figuring the working conditions. They even build their houses on them, with whatever piece of wood they can find. The hut is a replica of these adobes, and the video explains what the imagination cannot grasp. 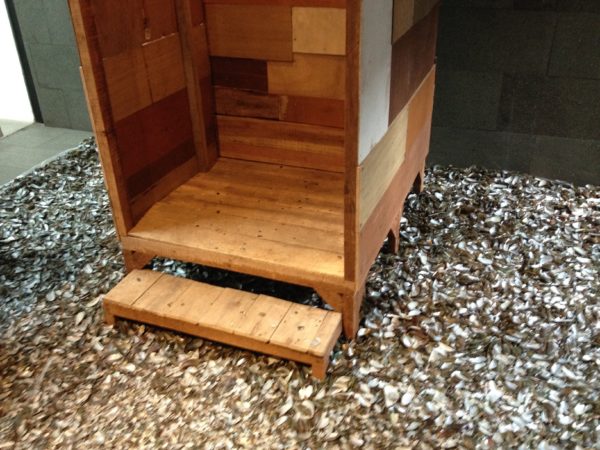 A friend of mine who had come to visit me in Jakarta a while ago had been to that neighborhood and had showed me some pictures, like this one: 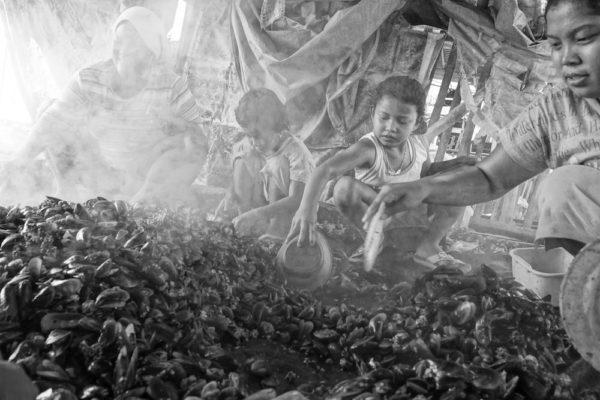 Seeing this work of art brought back the memory of the shock I had felt when I had seen them. I decided I’ll visit the neighborhood in person after the Christmas break – as a way of nurturing my empathy and express it to others.

The stories these artists chose to tell through their works have obviously touched them to a certain extent. The inspiration sometime came from tragic and demeaning situations, more rarely from uplifting ones. In any case, they chose their art as a means to share what they witnessed. All through the visit I thought that what these artists do is What Expats Can Do: Observe with empathy, take in and give out to the world. They chose art as a way of communicating; we can choose any means we deem appropriate. What is important, though, is that we never forget that we are in a privileged position to observe things that our communities back home will probably never witness first-hand. It is our duty to talk about them.