Luca Bonacini is a very dear friend of mine, and of Expatclic. A longtime expat, professional photographer, father of two beautiful young men, in his experiences abroad, Luca fixes his lens on situations related to the countries he gradually discovers. In particular, he keeps an eye on social issues, suffering and inequalities. Presently Luca lives in Brasilia, where he continues his intense activity as a photographer. This time, however, we met him in the role of curator of a photo exhibition. I interviewed him to introduce you to the wonderful initiative he is dedicating himself to.

Luca has known many countries in the world. Of Belarus, however, he only had childhood memories, when he saw the name White Russia on the atlas and was fascinated by it. With his child’s eyes, he imagined a place of fairy tales, submerged in snow, all white, muffled. That it belonged to the Soviet Union in the midst of the Cold War, added a touch of mystery. When the wall collapsed and things started changing, Belarus remained an unknown and mysterious place for Luca.

Until then, in Brasilia, he meets Olga Aleszko-Lessels, an expat with double nationality, Belarusian and Polish, whose parents live in Minsk. 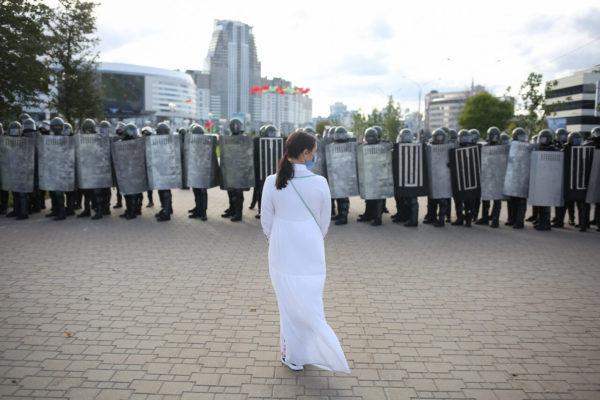 The richness and the great privilege of us expatriates are that we not only penetrate deeply into the cultures that host us, but we also come into contact with people of the most disparate nationalities, backgrounds and experiences. From the various pieces that make up the mosaic of our global human experience, sometimes one stands out in a particular way. Olga had this effect on Luca.

She passionately told him about the peaceful protests of ordinary people, especially women, before and after the Belarusian Presidential elections 2020 in August. Olga and her colleague Anastasiya Golets, another Belarusian activist working in the field of art, showed him truly impressive images and documentaries about protests and repression. When they asked him to become curator of an exhibition called “Democracy with a woman’s face“, Luca, of course, immediately accepted:

“I was struck by the strength and beauty of the movement. I was very impressed by the massive and peaceful presence of women who have assumed a central role in the struggle for democracy, also thanks to the leadership of Svetlana Tickhanovskaya, the opposition candidate. It should be remembered how Alexander Lukashenko, for over 25 years at the head of the last dictatorship in Europe, dismissed his opponent: “Our constitution is not made for women“.

Anyone who has followed the events in Belarus since the elections knows that the peaceful street protests against the electoral fraud that reconfirmed the outgoing president were followed by a brutal repression: exorbitant fines, arrests, torture, threats and intimidation of demonstrators. Some even disappeared.

The ethical motivation and the values of justice that have always moved Luca were coupled by the professional challenge that curating such an exhibition implies: “I have been involved in projects as a photographer. I have “curated” my own exhibitions but never the exhibitions of others. It is a new and beautiful challenge, that of combining documentary photographs with more artistic ones. And also to look for the right balance between information and emotion. Explaining and mobilizing, making a brain and a heart dialogue… to encourage action”. 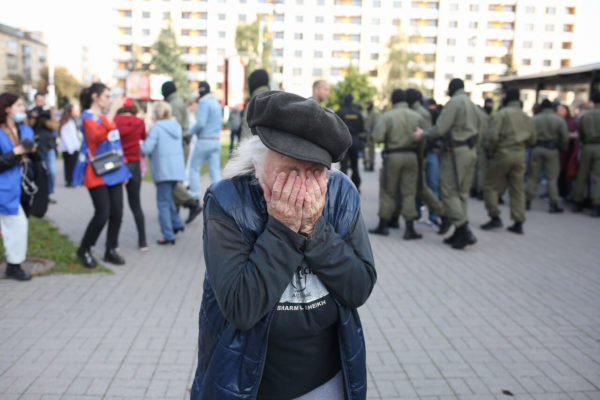 In this regard, I ask Luca how an in-person exhibition and an online exhibition differ with respect to their purpose. And if it will be possible to circumvent the obstacles posed by COVID-19 for the events that physically see us side by side.

“There is not doubt that we are going through a particular moment. Still, I find physical presence fundamental. An online exhibitions certainly wins quantitatively and can be seen by many more people. But think of the difference in placing yourself in front of a 40 x 60 centimeter photo compared to a 5 inch cellphone? It is a much deeper effect. The physical space also allows you to put different images “in dialogue”, by complementing each other and connecting one another. The word “experience” is fashionable at the moment: Visiting an exhibition is an experience that involves not only the act of looking but also that of moving around, getting closer to better observe a detail, commenting with those besides you and with strangers. An online exhibition does not have these virtues. It is certainly useful to reach more people, it can last over time, it can be made interactive, but it is not comparable to the live experience in terms of emotions and impact“.

The exhibition that Luca is about to curate is part of a global movement. Exhibitions dedicated to democracy, human rights and peaceful protests in Belarus have already been held in more than 13 countries by Belarusian communities, including Paris, Berlin, San Francisco.

For Luca, contributing to exhibit in Brasilia is fundamental. As a good expat, he notes: “I do love the idea of showing a positive example in the country where I live. A country – Brazil – where most mobilizations are in favour of shutting down the congress and the federal court, and of a military intervention. It seems absurd, but that’s the way it is: a part of the population asks for the reduction of fundamental freedoms…certainly not a numerically major part, but loud, and very present”.

A final reflection concerns the connections born when living abroad, the emotional, practical and intellectual intertwining that every expatriate can – and in a certain sense must – cultivate. 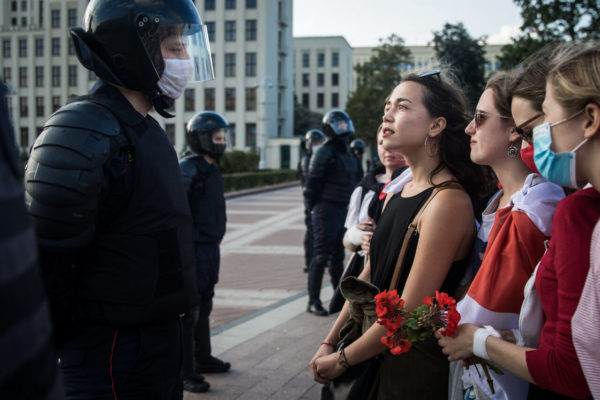 As Luca rightly says, “An international life puts you in front of many different situations and opportunities and it’s up to you to seize them or let them pass. One of these for me was meeting Anastasiya and Olga. Looking at the photos, the faces and the expressions, and above all listening to the testimonies in the documentaries, I found that typical “Balkan” way of going straight to the essential (Luca has lived in Sarajevo in the past, ed). No frills: Rights, democracy, freedom, future!!! As in Bosnia, I have seen young, indeed very young people fed up with old politicians, asking only for freedom, very ordinary young people with immense courage. They might not be the classic activists but in the interviews of these very young female Belarusian protestors, in their words, in their eyes, we read dismay but also an incredible determination to move forward. This alone makes me think how important this project is”.

If you want to help Luca, Olga, Anastasiya, the Belarusian women who struggle daily, and those expatriates who follow dismay from other countries, you can also make a small donation to the fundraiser promoted to bring the exhibition to Brasilia. You find all details HERE.