What is linguistic empathy, and why is it important to practice it?

According to a survey of the Ethnologue, there are 7,099 distinct languages in the world, but only 23 of them account for more than half of the world’s population. Mandarin and Spanish rank first and second, but it is English, with its third place on the scale of most spoken languages, which is widely regarded as the lingua franca in most business and human interactions across countries.

Every language is the expression of a culture. Even little heard of languages like Angika, Glaro-Twabo and Tremembé stem from the repeated verbal interactions of the population that speaks them. Every single language in the world has its own particularities, grammatical structure and colloquialisms or slang. Some are common to most languages, some are not. Some languages do not have words for colours, others do not have the past tense. Some need to be reinforced by gestures; others rely only on voice tone.

What must never be forgotten is that language does not only come as a set of sounds and organised terms, but that it tells the story of a whole culture, conveys the feelings, frame of mind, pace, habits and codes of a cultural group. And it should be approached as such. 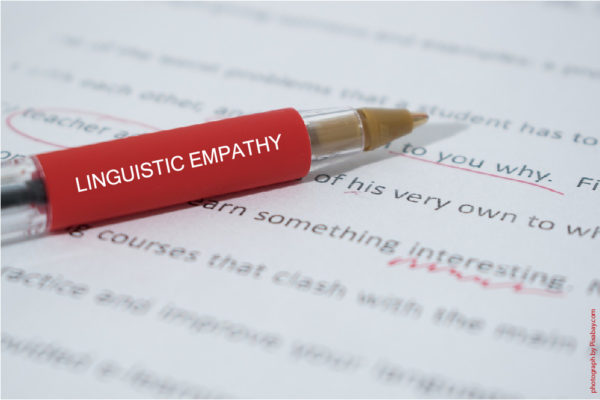 When a person speaks or writes in a language he has not mastered perfectly, he resorts to what is more familiar to him in terms of written and oral expression. He will transpose the structure of his native language and apply it to the other. When seeking for examples, he will refer to his own experience, and depending on the culture he comes from, he might resort to long words, colourful gestures, or convoluted phrase constructions to make himself understood.

To be understood. Think of a person who lands in a new place, and does not know its rules: What she’ll need is a space to express herself and be taken in. Language is the first vehicle to communicate with people when a culture is still unknown, but it takes time to build the ability to use it in a satisfactory way.

As expats, we know all this. We have both been in a new place without knowing its language, and have welcomed dozens of newcomers into our social circles, who could hardly express themselves. We are used to speaking, reading, writing and listening to foreign languages and going beyond the pure meaning of words, because often-times we don’t know the meaning. We encourage people to express themselves freely when they have not mastered a language, because we’ve been there. We have experienced what it means not to be able to express ourselves or to be understood, and we can therefore practice our linguistic empathy.

Linguistic empathy means never to forget that behind a language lies a culture and a human history, that has influenced the outcome of the use of that language. And that if we stop at what we hear with our ears or read with our eyes, we probably miss what the person is trying to say.

Practising linguistic empathy means never saying “I don’t understand, this is not how you say it in English”, but asking oneself where does the person who speaks come from? What could he possibly be wanting to say? What would he tell me in his language, what is he communicating with his body, eyes, posture, or perhaps in the overall content of the article he wrote?

Practising linguistic empathy requires us to always be connected to the whole of our human experience. It means listening and interpreting using all we know about the culture that person comes from, or the particular situation or experience she is going through.

It requires a lot of creativity, warmth, energy and motivation. And a lot of love for human interaction, and of hope for a better world.