My most important experience as a volunteer

Claudia remembers the time when she was living in Honduras, and how her experience as a volunteer there changed her.

Volunteering is often confused with charity, especially when it comes from groups of rich expats in disadvantaged countries. While I love giving my time for free for a variety of reasons, I am 100% allergic to those forms of charities (like dispensing used clothes and giving Christmas gifts to poor children forgetting about them the rest of the year). Whenever I happened to be part of any of these charity groups, I always felt deeply embarrassed and ill at ease. When I saw myself through the eyes of the “poor” people we were helping, I would have loved nothing more than for the earth to open and swallow me. Never in my life have I felt the privilege of my being born white, in the Western world, and in the right family at the right time like on those occasions.

Luckily there have only been a few of them. I tried to pick my opportunities to volunteer carefully, and chose situations where I would be looked at not as merely conveying welfare, but as a person who happily shared her skills and experience out of sheer love for the humanity. 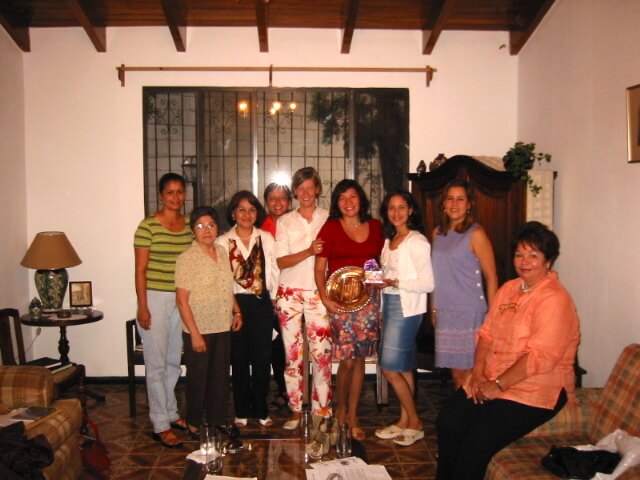 Part of my group of great ladies

In Honduras, where I lived from 1999 to 2003, I was a young full-time mother with lots of time on her hands when children were at school. I could not work (thanks to the country’s regulations) and I had a strong desire to get close to my hosting culture, and to honour what has always been my deepest value: support.

Someone told me of an association of international aid workers’ spouses who met once a month to plan support for a number of social projects in Honduras. I felt the alarm bell ringing… but I went to have a look anyway.

It took me a while to overcome my prejudice and let go of the impression of having to deal with a group of rich ladies that washed their conscience in wrapping gifts for the abandoned kids. In fact, they did just about everything but that – well, they wrapped gifts, too, but only at Christmas ☺ – and by that time, I had madly fallen in love with them.

I had fallen in love with them because what they did was human, clever, and provided a multitude of channels to get in touch with the local culture and work on our own terms on our relationship with it.

The thing I absolutely loved the most while I was part of this association, was raising funds to renovate an unused area of the Paediatric Burns Unit of the biggest public hospital in Tegucigalpa (the capital of Honduras) and supervise the project to create a space that we – the famous ladies – had planned together with architects, doctors, physiotherapists and parents of the hospital. A space where children would be happy to go and have their physiotherapy treatment, and enjoy some games and activities while waiting. 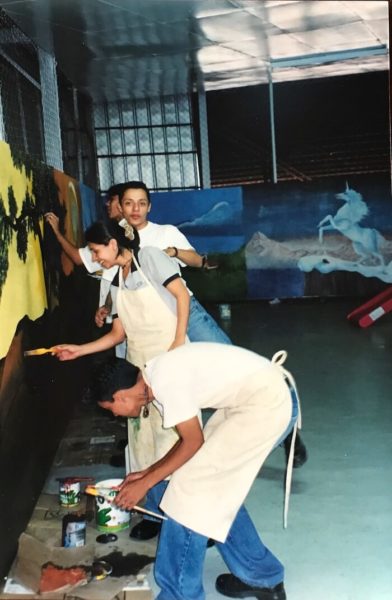 Art students of Tegucigalpa paint the recreational space at the hospital

There is no place like a public hospital to understand the reality of a country.

Volunteering at the Hospital Materno Infantil of Tegucigalpa, was a school in itself. The vast majority of burn related accidents happened to children while their parents were away at work. Parents who were too poor to afford a baby-sitter. Or they took their children with them while working, which in some cases was even worse. The most heart-breaking case I saw in that hospital was of an 8-year old girl that had fallen into the boiling mix of sugar cane their parents were processing.

When things like this happened, we would arrange shifts at the hospital to be in strict contact with the doctors and help the family pay for whatever expensive medicament or equipment was needed to save and treat the child. We would also stay with the patients, because parents were not always in a position to spend the whole day and night with them – some came from far away and had other children to look after at home.

This was all when parents were in the picture… I remember one day arriving at the department and being met by an upset nurse: early that morning they had admitted a baby who had been born in secret and abandoned by his mother in an alley. Stray dogs had tried to eat him, and he had only been rescued thanks to the fact that someone was passing by at that moment. He was immediately operated and lost a leg. I will never forget the sight of that baby sleeping under a thick blanket. I cannot really find words for what I felt.

Our relationship with the hospital grew stronger and deeper. We were not imposing our idea of aid, but put ourselves at the service of the medical staff – they were the only people entitled to say what was needed and how the help had to be administered. 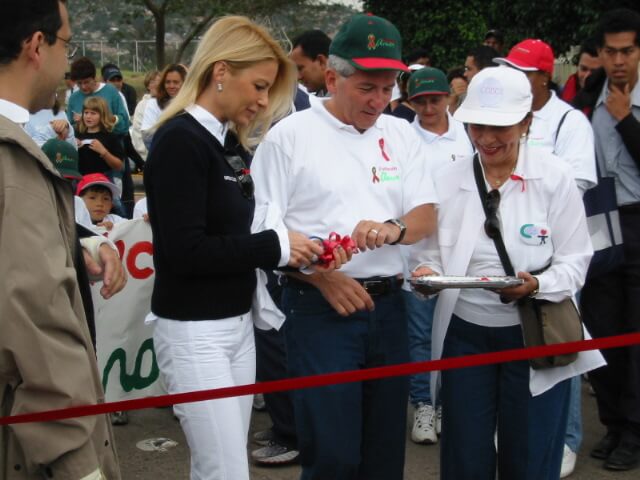 The then president of Honduras, Ricardo Maduro, and the first lady, Aguas Santas Ocaña Navarro

One need they expressed was that something be done for AIDS patients. Thus, we started a programme to collect funds (we even rented cinemas and organised premières for that aim!) to cover the costs of retrovirus medications for those patients who could not afford them. We even went so far as to organise a march to raise awareness about the discrimination people with AIDS were subjected to. We were absolutely proud of being able to have the President of Honduras and his wife marching alongside us.

Whenever I think back on those moments, I feel a wave of warmth within me that I can hardly describe. As accompanying spouses, we often complain that we have less chances than our working partners to get in touch with local realities. This was not the case for me in Honduras – thanks to my volunteering with that hospital. I am sure in every country there are similar occasions. I invite everyone to look for them, and to participate. It is not only a way to give back to the countries that kindly hosts us; it’s not only a channel to get to know and understand the local culture; it’s not just about becoming deeper people who are exposed to stories we would never have experienced back home: it’s also, and foremost, to honour the chance we’ve had to go and spend a period of our lives outside our borders, and witness first-hand that the world is not the same for everyone.